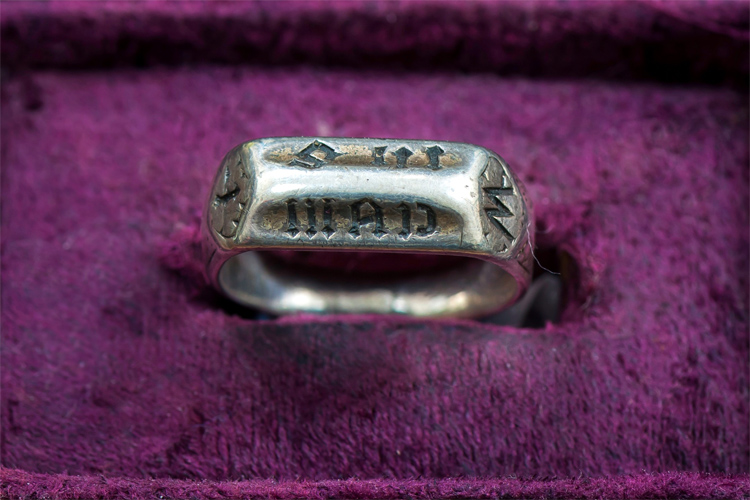 A ring that belonged to the French heroine Joan of Arc was sold for £297,600, at TimeLine Auctions, in London. The new owner is France.

The historic handcrafted silver-gilt piece was accompanied by documents that prove the authenticity of the ornament. The square-shaped ring was offered by Joan of Arc to Cardinal Henry Beaufort before she was executed.

“If there is one icon of ancient French law that excite passions today between the English and the French, it is the saintly figure of Joan Dark, the 16-year-old girl who, for the benefit of France, tried her utmost to defeat the invader, the English,” notes the spokesman for Timeline Auctions.

“This ring was described precisely by her in her trial. It’s a devotional ring; it’s inscribed with the script that reads: “Jesus and Mary.” This ring was given by her on the eve of her death, and it is passed through a variety of collections in Britain with an incredible portfolio of provenance and a note to prove that this was once Joan of Arc’s ring.”

The precious ring was made around 1400, and it was given to the French girl by her parents. Arc, also known as the “Maid of Orleans,” was captured by the Burgundian party, an English ally, during the Hundred Years’ War.

She helped King Charles VI lift sieges and boost French morale after claiming she had received divine guidance from Archangel Michael, Saint Margaret, and Saint Catherine to support France in the war against the English.

Joan of Arc was sentenced to death by Pierre Cauchon, the pro-English Bishop of Beauvais. On the 30th May 1431, she was burned at the stake at only 19 years of age.

Twenty-five years later, she was pronounced innocent and declared a martyr. Joan of Arc was beatified in 1909 by Pope Pius X and canonized in 1920 by Pope Benedict XV.

How to make a simple ring