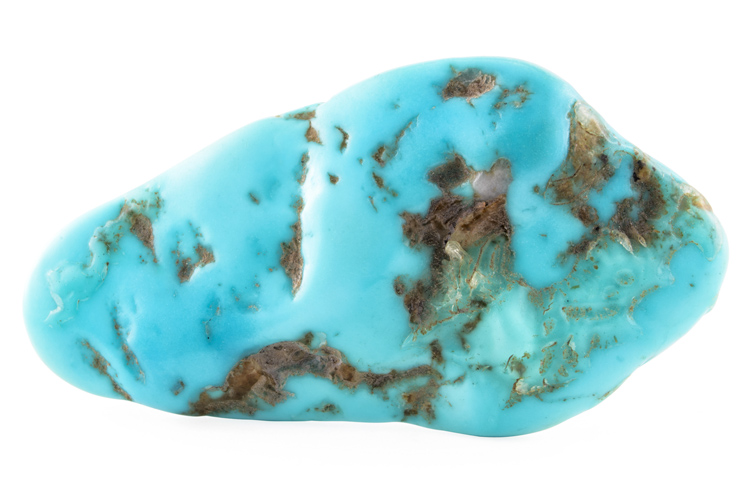 One of the first stones to be mined by man, the unforgettable turquoise is a green to sky blue aggregate of hydrated copper and aluminum phosphate.

The name turquoise derives from the French piers turques, meaning “Turkish stone,” and refers to the trade route via Turkey that brought the gem from Asia to Europe.

It is one of the most ancient gemstones: turquoise beads from 5000 BC were found in Mesopotamia, and it was mined by the Egyptians in the Sinai Peninsula before the 4th century BC.

It was also the national gemstone of Persia and an important part of the Native American culture.

Turquoise occurs in dense, massive, or microcrystalline forms, as nodules, encrustations, or veins, and crystals are rare.

The gem is opaque to semi-translucent, and the color ranges from pale green to bright grass green or vivid sky blue, depending on the amounts of iron and copper in the stone.

Top-quality turquoise is intense and evenly colored, with no traces of rock matrix.

However, turquoise gems with a delicate, attractive, and evenly distributed spiderweb pattern are also valued.

The latter are often treated with artificial resins or wax to improve color and hardness (“stabilized” turquoise).

Nishapur, in northeast Iran, is the source of the best-quality turquoise and is the place where the stunning and highly desirable sky blue Persian Turquoise can be found.

Before World War I, turquoise was the main export of Iran.

Although sky-blue is usually the most prized color of turquoise, in Tibet, the greener variety is preferred.

This light and fragile gemstone has a moderate hardness, ranking from 5 to 6 on the Mohs scale of hardness.

It is usually cut en cabochon or as beads and is also carved or engraved.

Care must be taken when handling turquoise gems and jewelry because, due to its porosity, it is sensitive to body oils, high temperatures, cosmetics, and detergents.

Turquoise rings, for example, should be removed before washing your hands.

Turquoise can be confused with amazonite, lazulite, chrysocolla, and hemimorphite.

It is imitated by dying other gems such as chalcedony or hoplite and by baking powdered turquoise pieces with glue.

The mystical azure color of turquoise, along with its strong appearance and soft touch, made it the stone of warriors, kings, and shamans.

The birthstone of December has been believed to be a gem of protection and good luck since ancient times and was often used as an amulet.