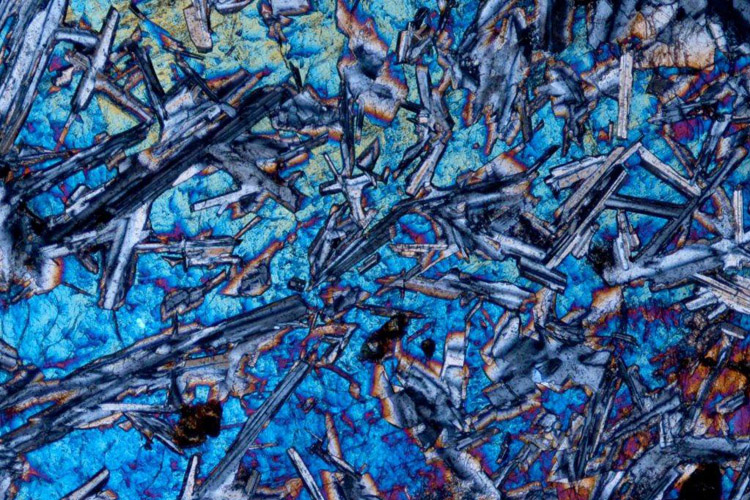 Tranquillityite is one of the three lunar minerals found in the rock samples brought by the Apollo 11 mission in 1969.

Initially, it was thought to be unique to the moon, but in recent years tranquillityite has also been found on Earth.

Tranquillityite is a silicate mineral mostly composed of iron, oxygen, silicon, zirconium, and titanium, with small traces of the rare earth element yttrium and calcium.

The lunar stone was named after the Mare Tranquillitatis (Sea of Tranquility), the site of the first moon landing.

Along with pyroxferroite and armalcolite, tranquillityite is one of the three minerals found on the moon which had never been seen on earth.

The first two were eventually identified on the earth’s surface over the next ten years, but tranquillityite remained as a mineral unique to the satellite, with no terrestrial equivalent, found only in moon rock samples and lunar meteorites.

In 2011, small samples, just microns in length, were eventually found in six locations in the Pilbara region in Western Australia.

Tranquillityite was mined in a local billion-year-old rock formation, and according to the paleontologists who made the discovery, it may be more common on our planet than anyone could think.

They also believe that the discovery proves that similar chemical processes occur on the moon and on earth.

The habits and chemistry of earthly tranquillityite are consistent with the ones of its lunar counterpart.

The mineral occurs in thin stripes in basaltic rocks, where it forms at a late crystallization stage. It is nearly opaque and dark red-brown in color.

Although tranquillityite is not a valuable gemstone, it is possibly one of the rarest minerals on our planet.

In 2014, a man proposed to his wife at the Burning Man event in the Black Rock Desert (Nevada, U.S.A.) with a custom 3D-printed ring that contained 0.32 grams of Tranquillityite.

It was part of a lunar regolith that had fallen as a meteorite in Morocco and one of the only samples not owned by NASA.