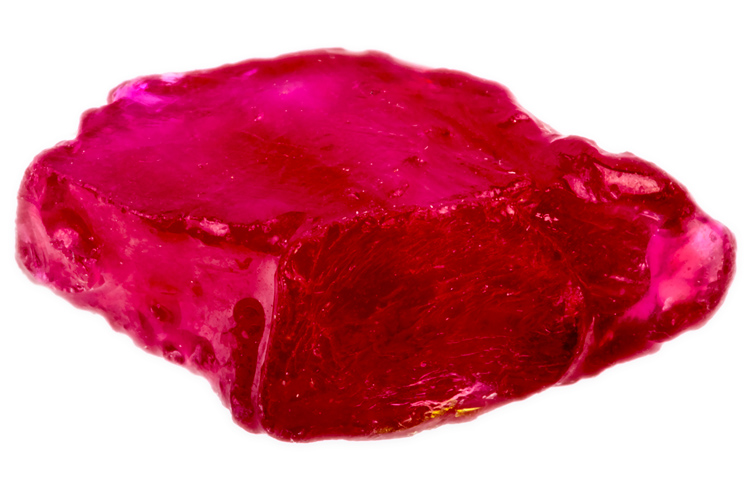 Ruby, the “king of precious stones,” is the red and most valuable variety of corundum, an oxide of aluminum.

The second hardest mineral after diamond, this fiery gem can reach the highest price per carat of all colored gemstones.

Ruby, along with sapphire, is a gem-quality variety of corundum. Pure corundum is colorless.

The intense and rich red coloration of ruby is due to the presence of traces of chromium. The more chromium present in the gem, the more intense the red color.

Ruby crystals tend to form in hexagonal prisms, occurring in metamorphic and igneous rocks. They can also be discovered in alluvial deposits after eroding from their primary deposits.

The crystals are usually small because chromium has an inhibiting effect on the gem’s growth. Specimens over ten carats are very uncommon, making larger rubies significantly more valuable.

The price per carat increases even more with the size of fine-quality rubies, which rarely occur over one carat.

The name ruby derives from the gem’s color: rubeus, in Latin, means “red.” In Hindu tradition, it has always been considered the most valuable gemstone, and in Sanskrit, it is called Ratna Raj, the “king of precious stones.”

The color is the most important aspect of ruby, as it can highly affect its value.

The most prized color is a pure, saturated, and vivid red with a hint of blue (blood-red). The color of ruby varies within each deposit, so it is not possible to determine the source of the gem by its coloration.

Fine-quality ruby is neither too light, as it can be considered pink sapphire, nor too dark because the dark color may impact negatively on the gem’s shine.

Ruby forms a continuity in color with sapphire, leading to a debate over the line separating a ruby from a pink sapphire.

However, highly visible inclusions or inclusions that affect the gem’s shine, transparency, or durability will reduce its value.

Some inclusions may actually favor the gem’s appearance. Included rutile needles can produce a soft sheen, called silk, and a rare cat’s eye effect or the very desirable asterism when cut en cabochon.

The type of inclusions found in the gem also indicates its source location.

Very few high-quality rubies have been found in Mogok Valley in recent years, but other deposits have been discovered, and Myanmar remains one of the leading sources of ruby in the world.

Rubies have excellent hardness. They are a 9 on the Mohs scale of hardness and, once polished, display an exceptional luster, close to that of a diamond.

The shape of the crystal dictates the shape, but the most common cuts for transparent rubies are oval and cushions, with brilliant-cut crowns, and step-cut pavilions.

The less transparent stones are cut en cabochon or carved. The red color of ruby is often enhanced through heat treatment.

Gem-quality synthetics and numerous imitations are currently on the market. Ruby can be confused with other red-colored gemstones such as spinel, almandite, topaz, tourmaline, and zircon.

The stunning ruby is a symbol of good fortune and has been associated for centuries with the fire of passion, the power of life, success, wealth, and divine love.

Rubies represent secular and religious power and are often present in the royal crowns of Christian monarchs, where they evoke the blood and suffering of Jesus Christ.

It is also believed to treat blood disorders.