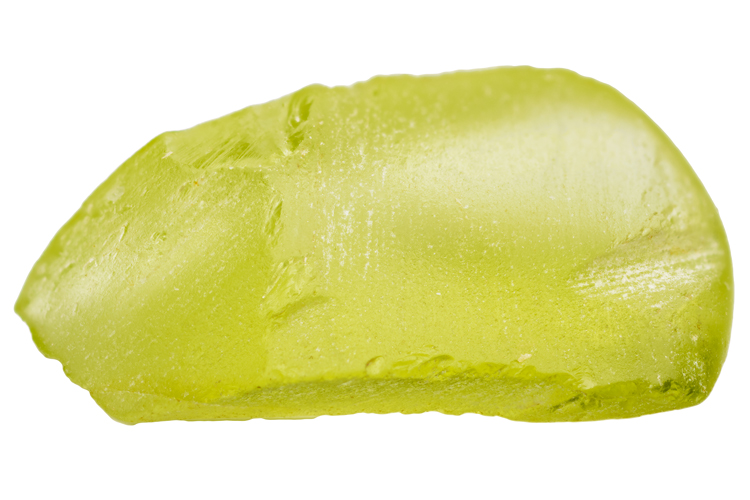 Called the “gemstone of the sun” by the Egyptians, this mythical gem has been found in pallasite meteorites and comet dust.

Transparent, with a vitreous luster, peridot is the gem-quality variety of olivine and one of the rare gemstones that only occur in one color.

The name peridot is believed to be an alteration of the Anglo-Norman word pedoretés, meaning “a kind of opal.”

The light yellow-green coloration of peridot is due to the presence of iron, and the amount of iron determines the intensity and hue of the green.

For that reason, this transparent gemstone’s color can range from pure green to yellow or brownish-green.

Most peridots exhibit a yellowish-green tonality, and very rare exemplars display chatoyance or asterism. The rare true green, with no traces of brown or yellow, is the most desirable color.

High-quality peridot displays an intense color and has no eye-visible inclusions, and the larger the gem of fine quality, the higher the value.

Diamond and peridot are the only two gemstones formed inside the earth’s mantle.

The green crystals occur at about 20 to 55 miles deep and are brought to the surface by volcanic and tectonic activity. They also occur in space, but extraterrestrial peridot crystals are extremely rare.

The history of the peridot as a gemstone dates back to ancient Egypt. It was mined for more than 3500 years by ancient Egyptians on the volcanic island of Zabargad.

Some researchers believe that Cleopatra’s notorious emeralds may have been, in fact, peridots. The gem was later brought to Europe by crusaders, where it was used for ecclesiastical applications.

With a hardness of 6.5 to 7 on the Mohs scale, peridot is cut in a great variety of shapes and styles. The largest cut peridot is a 310-carat gem stored by the Smithsonian Museum in Washington, USA.

The birthstone of August, peridot, is a gem of light. The gem is believed to guard the wearer against evil spirits and to bring balance and prosperity.