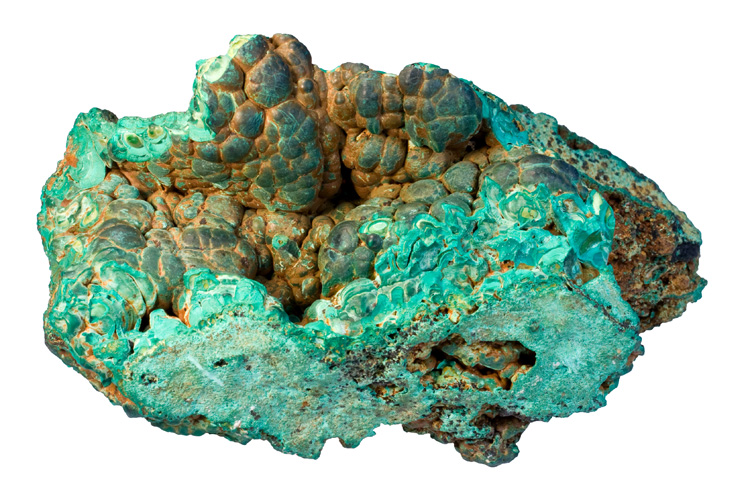 Malachite is a vibrant green copper carbonate hydroxide and possibly the earliest ore of copper. Despite its low hardness, the striking color of malachite and its unique patterns make it a beautiful decorative and ornamental stone.

The name malachite comes from the Greek word malache, meaning “mallow,” due to the resemblance of the gem to the green leaves of the mallow plant.

The green mineral has been mined in the eastern and Sinai deserts since 3000 BC. It was used as a pigment in paints, but today its main use is as a gemstone and ornamental stone.

The gem was popular among Egyptian, Greek, and Roman civilizations, which used it for amulets, ornaments, jewelry, wall painting, and eye shadow. Malachite was also highly prized in ancient China, where it was called “shilu.”

Malachite is translucent, in thin plates, to opaque, and copper is responsible for its stunning green color. Single crystals are rare, as well as large monocolored pieces.

The variety of habits of malachite produces fascinating patterns that are revealed when the stone is faceted.

The banded dark and light layers range in shape from straight stripes to concentric rings or other figurative shapes, swirls, and bands.

Malachite can be found as botryoidal or encrusting masses, fine fibrous aggregates, or concentrically banded stalactites.

It is formed from copper-containing solutions in copper deposits around limestones.

The gem is usually accompanied by smaller amounts of azurite, and its vivid green color is usually visible on the surface of copper deposits, indicating the presence of the metal.

The main source of malachite used to be the Ural Mountains in Russia in the 19th century.

These deposits provided large amounts of malachite to Europe and produced single masses weighing up to 51 tons.

Kolwezi, in the Democratic Republic of Congo, is currently the primary provider of high-quality malachite, and the country is the most important malachite producer.

Other deposits are in Australia, Morocco, Chile, and Arizona (USA).

This mineral is abundant in its more typical forms. The most valuable pieces show an unusual habit, unique pattern, or a chatoyancy effect.

Malachite is a very sensitive gem that only reaches 3.5-4 on the Mohs scale of hardness. It is commonly cut into beads, cabochons, and all kinds of carvings.

This gentle gem is sensitive to heat, acids, ammonia, and hot water and is easily scratched, so it should be worked and handled with care.

On a more symbolic note, malachite is the birthstone of July.

Malachite is believed to be a strong protection amulet and a stone of love, emotional stability, and transformation, and also of prosperity and good fortune.