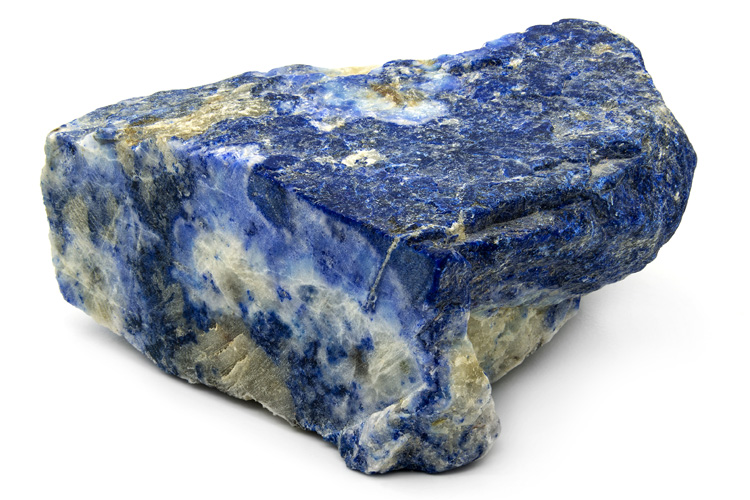 Treasured for its intense indigo color since ancient times, lapis lazuli is a semi-precious rock composed of several minerals and one of the most important opaque blue gems.

This contact metamorphic gem is usually found in limestones and has a variable composition and physical properties.

Its principal components are lazurite, pyrite, and calcite, but other minor constituents such as sodalite, diopside, amphibole, feldspar, and mica may also be present.

Lazurite (25 to 40 percent) is the essential component of lapis lazuli and is responsible for its attractive royal blue color. The more lazurite is present in the stone, the darker the blue tonality.

The word lapis is of Latin origin, meaning stone, while lazuli is of Persian (lāžavard) and Arabic (lāzaward) origin, referring both to the lapis stone and to a location where the gem was mined.

With time, the name lapis lazuli became associated with its intense, rich color: the words azure (English), azure (Italian), azul (Portuguese and Spanish), and azur (French) come from the color and name of the beautiful blue gem.

Lapis lazuli is semitransparent to opaque, and lapis lazuli rough can occur in very large sizes.

Although dark blue is the best-known and most prized shade, the gem can also occur in other shades and hues because of the different mineral components present in each aggregate gem.

The color can range from a deep violet blue to light, turquoise, or greenish blue.

The most valuable exemplars display a uniformly saturated medium-dark to violetish blue with no visible calcite inclusions and little to no pyrite.

The presence of golden pyrite flecks is acceptable if they are small and attractively distributed on the surface of the gem.

Lapis lazuli has been mined since the Neolithic period in Afghanistan, most notably in the Kokcha River Valley in the province of Badakhshan.

The country provided lapis lazuli for the Egyptian, Mesopotamian, Greek, and Roman civilizations and is still the primary source of the finest gem-quality stones.

The historical gem can also be found in the Andes (Chile) and Russia. Canada, Angola, Colorado (U.S.A.), and Pakistan are minor sources of the gem.

The hardness of lapis lazuli varies from 5 to 6 on the Mohs scale, depending on the particular properties of the mineral mix of each stone.

The most common cuts are beads, cabochons, tablets, inlays, or carvings.

The link between man and lapis lazuli is estimated to date back to over 6,500 years, and ancient civilizations valued it as much as the precious blue sapphire or turquoise.

Besides captivating for its intense blue color, lapis lazuli is a gemstone of royalty, truth, wisdom, and inner power.

It is believed to encourage honesty and stimulate communication and problem-solving abilities.