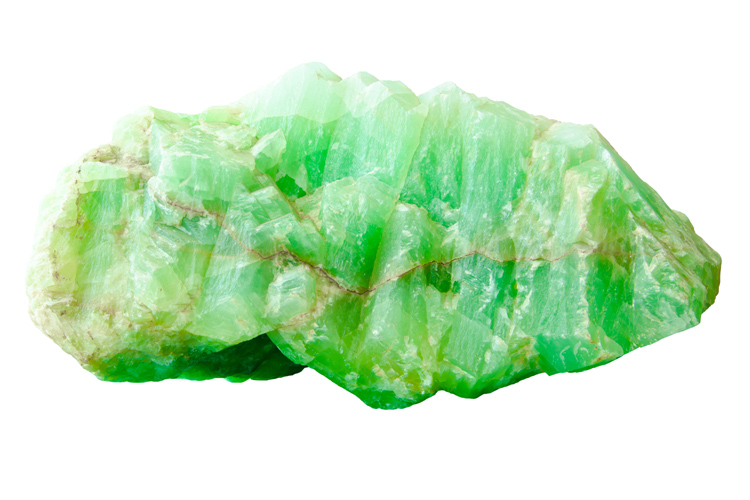 Considered more valuable than gold in pre-Columbian Central America and used in tools and weapons in prehistorical times because of its extraordinary toughness, jade is one of the most ancient and relevant gemstones.

Jadeite is a mineral of the pyroxene group, composed of interlocking granular crystals.

It is white in its purest form but also occurs in many attractive colors, most notably green (colored by iron) and lilac (colored by manganese and iron), as well as brown, pink, red, blue, black, yellow, or orange.

Jadeite has a smooth, soft texture and can be opaque to semi-transparent. The most precious form of jadeite is semi-transparent with a vibrant emerald-green color, also known as imperial jade.

Nephrite, more common and less expensive than jadeite, is a tough and compact variety of either actinolite or amphibole tremolite.

It is even tougher than jadeite and stronger than steel because of its structure of tightly interlocking fibers. For this reason, nephrite was used in weapons and tools in prehistoric times.

The color of nephrite varies according to its composition and is less diverse than jadeite.

It can be dark green (when iron-rich), light brown, or cream-colored (when magnesium-rich). Like jadeite, green is the most valuable color. White nephrite is called “mutton-fat jade.”

The primary source of jadeite is Myanmar, where the precious imperial jade can be found and where ancient jadeite weapons and tools were discovered.

Other deposits are in Japan and California.

New Zealand is the principal source of nephrite, where it occurs in serpentine rocks, rivers, or beach pebbles.

Jadeite’s hardness varies between 6 and 7 on the Mohs scale, while nephrite has a hardness of 6.

Despite their hardness, both gems are extremely tough. They are rarely faceted and are usually cut en cabochon as beads or carved.

The history of jade is ancient.

Nephrite has been used and cherished in China for over 8,000 years, where it was called yu, and its carving evolved into a cultural and artistic tradition.

In prehistoric and historical China, jade was used in ceremonial objects, decorative items, and burial suits and was seen as a godly and imperial gem.

The use of nephrite was also documented in neolithic and chalcolithic Europe and still plays a significant role in the Maori culture in New Zealand.

Jadeite, on the other hand, is connected to the Indians of Mexico, Central, and South America, where it was considered sacred and more highly valued than gold.

When the Spanish reached Mexico, they brought jadeite back to Europe, believing it was the same jade used in Europe at the time, which was, in fact, nephrite.

Only in 1863, when a Chinese carving was analyzed, the difference between the new world and the old world jades was discovered.

Jadeite from Myanmar was the first to reach China in the late 1,700s, and a preference for jadeite eventually developed. The Chinese jade carvings are true masterpieces of unmatchable artistry.

The ancient lure of jade persists until today. It was revered in pre-Columbian Central America and has been the most esteemed gem to the Chinese for its beauty, healing powers, and protection abilities.

Jade is seen as a tool to access the spiritual world, a strong protection talisman, and a stone of friendship, tranquility, and truth.

It is also seen as a powerful healing stone with medicinal properties: both jadeite and nephrite are believed to heal and prevent kidney problems.