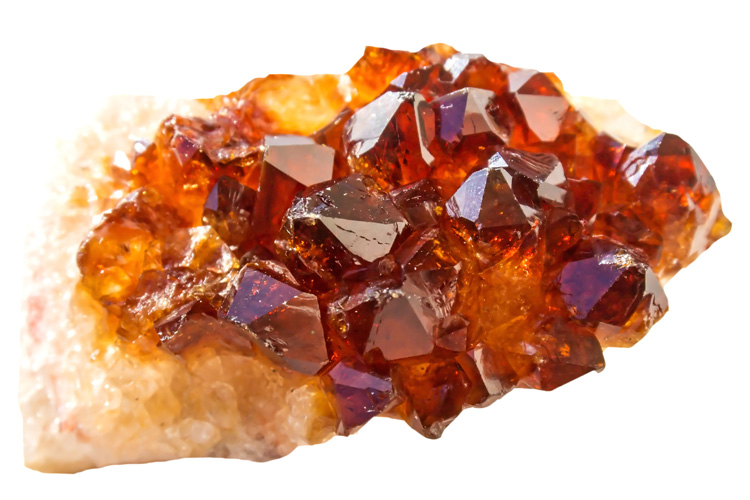 Garnet minerals can be found in virtually all colors. There are six types of garnet gems: almandine, andradite, grossular, pyrope, spessartine and uvarovite.

Typically, garnet is known for the dark-to-wine red color that appears in many jewelry pieces, but that is not its most valuable color.

Garnet is quite common in the red, orange, yellow, green, purple, brown, black, and pink colors, but the blue pieces are the rarest and most expensive gems.

Color changing is one of the garnet’s particular characteristics. Under incandescent light, garnet stones can go from gray to red.

These nesosilicates occupy a level between 6.5 to 7.5 on the Mohs scale, and when they fracture, you can easily identify sharp and irregular parts.

The study of garnet examples in metamorphic rocks allows scientists to understand the age and temperature of the host structure clearly.

Although red garnet is very popular in ancient and contemporary jewelry, this gem has also been used as an abrasive to cut steel and in water filtration.

Garnet has been mined for a long time in Rajasthan, India, and can also be found in Australia, the USA, and China.

Red garnets were used in the famous “cloisonné technique,” a unique skill for decorating metalwork objects. Today, the star garnet is the state gemstone of Idaho.

Only the purest forms of garnet crystals are used in high-end jewelry.