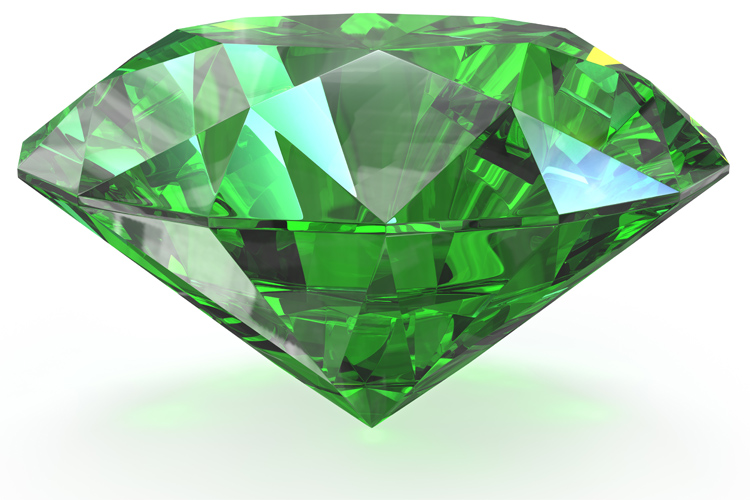 The most precious variety of beryl, the emerald, has allured mankind for ages for its incomparable and unique rich green hue, elegance, and mystery.

This designation appears to have been given to several green gemstones, so the historical references to emeralds may not refer specifically to the present mineral.

The stunning and unique color of emerald, known as “emerald green,” is due to the presence of chromium.

Traces of vanadium may also be present, but beryls colored only by vanadium are not considered emeralds by some gemologists but simply green beryl.

The finest emeralds are transparent.

The most prized tonalities are slightly bluish-green to pure green, and the color should be vivid, saturated, and evenly distributed. A high-quality emerald’s value increases rapidly with size.

Most of the gems are clouded by inclusions, which are named jardin (garden, in French) by the experts because of their mossy-like appearance.

Visible inclusions are usually accepted in the industry, but when they impact negatively on clarity and transparency, they lead to a significant loss of value.

Emerald crystals are hexagonal and occur in schists, limestones, granites, and pegmatites. The finest specimens come from Colombia, but Brazil is also a significant source of emeralds.

The Cleopatra’s Mines in Upper Egypt are emerald deposits of historical interest since ancient emerald jewelry appears to have come from these deposits.

They were worked in 2,000 BC and became known as “Cleopatra’s Mines” after the conquest of Egypt by Alexander the Great.

The remains of extensive workings were discovered around 1817, but now they only yield poor-quality gems.

Emerald has a hardness of 7,5 to 8 on the Mohs scale. The emerald cut is the most frequent shape for this gem, as it was devised to reduce the loss of valuable material.

Emeralds that are not suitable for faceting or cabochons are sometimes tumble-polished.

Some stones are treated to enhance their color and hide flaws. However, they are less valuable than certified unenhanced high-quality emeralds of the same size, color, and clarity.

The first emerald synthesis was produced in 1848 by Jacques-Joseph-Ebelmen.

Since then, several methods have been developed, and since the 1950s, synthetic gems of excellent quality have been created.

Emerald has been credited with healing and renewal properties throughout history.

The Egyptians viewed the luxurious green stone as a symbol of life, rebirth, and fertility, and the Aztecs called it quetzal, a symbol of seasonal renewal.

Emerald is also a gemstone of royalty and is present in most royal jewelry collections. The largest collection of natural emeralds in the world is located in the Republic of Bogotá Bank in Columbia.