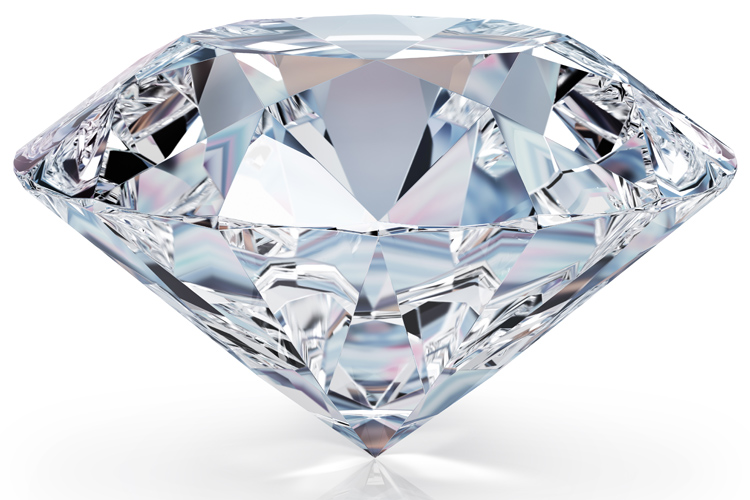 Pure, fiery, mythical, and ultimately perfect, diamond is the most highly prized of all gemstones and the hardest mineral on earth.

The Greek word adamas is the origin of the name diamond. It means unconquerable or indestructible, in a reference to its extraordinary hardness.

The solidity of this gem is incomparable: it has a cutting resistance 140 times superior to the next hardest gemstones, ruby, and sapphire.

The secret to the precious gemstone’s unique hardness and other remarkable physical qualities lies in its atomic structure.

Each atom is connected to four other equidistant atoms, creating a tightly bonded structure.

They are frequently well-formed because of the uniform arrangement of their carbon atoms.

While colorless diamonds are the most used in jewelry, the most famous of all gemstones can occur in all colors, from the most common yellowish to brown, black, or the rare blue.

The rarest colors are natural red and green, only superseded by pure violet and orange varieties.

The Earth’s mantle, below continental masses, holds the right conditions for them to crystallize, usually more than 95 miles (150 kilometers) under the surface.

Much more ancient than the rocks in which they are discovered, the gems were brought to the surface by deep-source volcanic eruptions and, with gradual erosion, the rare volcanic rocks containing diamonds – kimberlite and lamproite – were exposed.

The sparkling crystals can be mined in primary or secondary deposits.

The first sources of diamonds were alluvial deposits in India and later Brazil.

After the discovery of primary sources in South Africa in the 1870s, the country supplanted Brazil and became the leading center of diamond trade and production until about 1970.

The former Kimberley mine was South Africa’s most notorious pipe – 14.5 million carats of diamonds were discovered there.

Diamonds rank at the top of the Mohs scale, with a level 10 of hardness, and display a perfect cleavage. The value of white diamonds is determined by Four C’s: color, cut, clarity, and carat.

The most precious diamonds are chemically pure and absolutely colorless, flawless, with no visible blemishes or inclusions under a 10x loupe, precisely and proportionally cut, fully revealing the pure fire of the diamond, and large, since larger diamonds are rarer and, therefore, more coveted.

The history of the diamond is merged with the development of the brilliant cut, the one that best shows the gem’s superb fire and luster.

The artistry of the cut is the only man-influenced aspect of a diamond’s value and can affect it.

Diamonds can be imitated by other colorless stones, glass, or synthetic gems. Synthetic cubic zirconia is the most common diamond simulant.