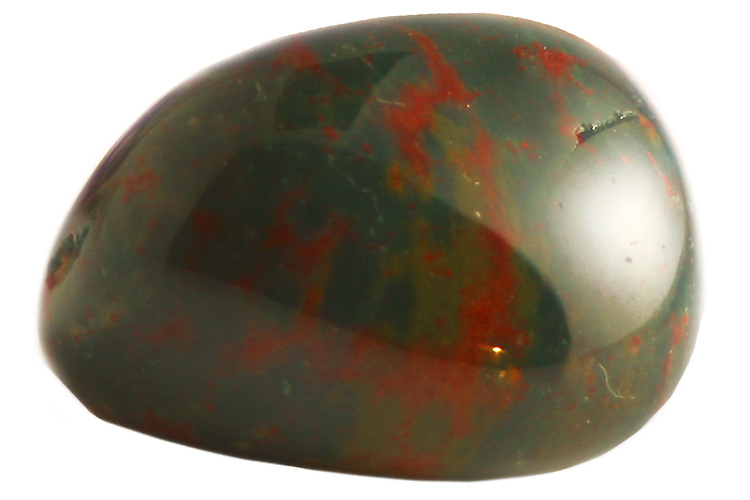 Mythical and pure, the bloodstone, or heliotrope, is a dark green variety of chalcedony colored by iron silicates and speckled with bright red jasper.

The alternative designation, heliotrope, is of Greek origin and alludes to the way the stone reflects the light. Helios means “sun” and trepein “to turn.”

With a hardness of 7 on the Mohs scale, heliotrope is preferred when displaying an attractive, solid green color that is not too dark and dramatic, with visible red spots, preferably in drop-like shapes.

The more the red color is present, the more valuable the gem is, as such specimens are now rare.

Traditionally, the bicolored chalcedony was used in men’s signet rings and is commonly carved en cabochon, cameo, polished, or in the shape of beads.

The main source of this unique gem was India, but now it can also be found in countries like Brazil, Australia, China, and the United States.

The myths and tales around bloodstone abound and date back to the first century BC. According to the Greek natural philosopher Damigueron, it had the ability to preserve health and protect against deceit.

A Christian legend tells that bloodstone was created during the crucifixion of Jesus Christ when blood dripped at his feet over a green jasper.

In Medieval Europe, the speckled gem was used to represent martyrdom and flagellation.

Due to its appearance, bloodstone was also believed to prevent nosebleeds, inflammatory illnesses, and hemorrhage.

On a more symbolic note, it also embodies justice and is said to act as a talisman against evil.