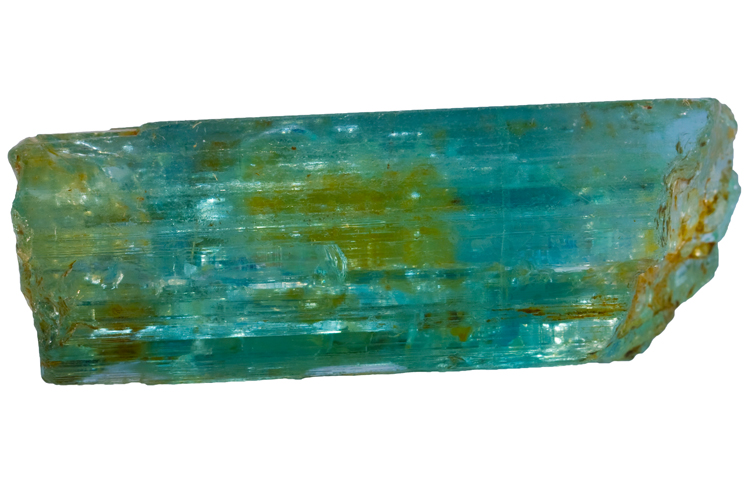 Aquamarine is one of the main varieties of beryl, the same mineral as the precious emerald and the birthstone of March.

Highly appreciated for its spark and blue to blue-green hue, this gemstone was named after aqua marinus (marine water) due to its seawater color.

The hexagonal crystals suitable for jewelry, which produce the much desired clear, shiny, deep blue gems, are long, perfectly clear to the naked eye, and flawless, with striations along their length, and can be as long as 39 inches (one centimeter).

Aquamarine is often freer of inclusions than emerald, with much better clarity and a more even color.

The best gem-quality crystals come from Brazil, where they occur in pegmatites or alluvial deposits and Mozambique.

The biggest aquamarine of gemstone quality was found in Minas Gerais (Brazil), weighing 243 pounds (110.5 kilograms) and measuring 18 inches (48.5 centimeters) long, with a diameter of 15 1/2 inches (42 centimeters).

Especially fine quality aquamarine has the trade name of “Santa Maria,” which is the name of the mine located in Ceara, Brazil.

Since 1991, high-quality Mozambique specimens with similar nuances are also called Santa-Maria-Africana, to differentiate them from de Brazilian crystals.

Aquamarine owes its fresh blue color to iron. It is a dichroic gemstone, appearing blue or colorless depending on the angle.

The most valuable stones display intense, deep colors and high clarity. Sea green was the most desirable tonality until the 19th century, but sky blue and dark blue are now the most valued colors.

A deep blue beryl called “Maxixe” was originally found in Minas Gerais, but its color fades in daylight.

Many aquamarine gems available in the market are heat-treated to improve their color. However, excessive heat can lead to discoloration.

This sea-evoking gemstone has a hardness of 7,5 to 8 on the Mohs scale.

The preferred cuts are brilliant-cut and step, in rectangular or long oval shapes, to show off and enhance its strong blue color. Some aquamarines are also cut en cabochon to show a cat’s-eye effect.

The connection of aquamarines to the sea is ancient.

They used to be engraved with the image of Poseidon and used by sailors as a protection amulet. It is believed to bring peace and serenity and to improve communication.