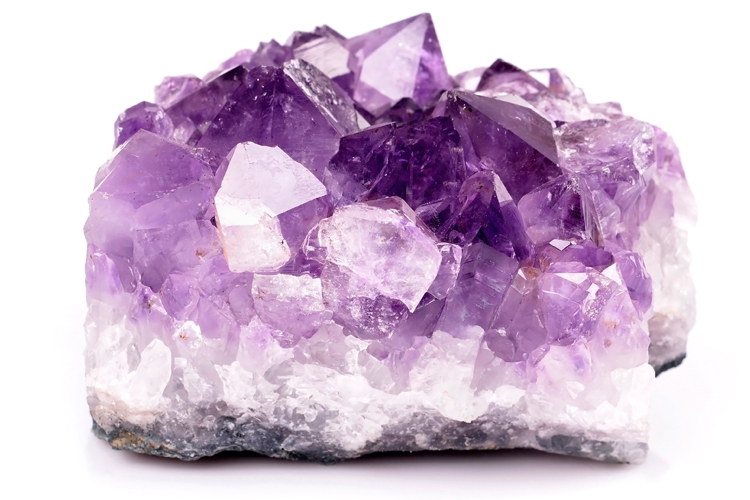 Amethyst is a variety of vitreous quartz with a rich violet, purple or red-purple coloration. Associated with piety and purity, this semi-precious gemstone was used and valued by various ancient civilizations. It has also been favored by royalty due to its regal hue.

The name amethyst derives from the ancient Greek word amethustos, meaning “not intoxicated,” since the stone was believed to protect against drunkenness.

The purple tonality of amethyst occurs mainly due to the presence of traces of iron. These stones are sometimes color-zoned due to the attraction of the coloring material to certain crystal faces.

This phenomenon is called preferential absorption.

The main commercial sources of amethyst are Brazil, Uruguay, Siberia, and North America. The Brazilian geodes often reach the size of a man.

Until the 18th century, amethyst was one of the most precious gemstones, alongside rubies, emeralds, sapphires, and diamonds.

The discovery of large deposits of amethyst led to the loss of most of the gem’s value. However, high-quality amethyst is still appreciated and used in jewelry.

The color displayed is the primary factor in determining the value of an amethyst, along with clarity, cut, and size.

The most valued shades of amethyst are deep, rich purple, or deep purple with reddish undertones.

Low-quality stones from Uruguay and Brazil are sometimes turned into citrine through heat treatment. The high temperatures change the crystal’s color to yellow-brown.

A Gemstone With a Long History

Amethyst is also sometimes forged by tinting glass or quartz with synthetic violet.

On the Mohs scale, the amethyst places on the 7th level of hardness. The most common cuts used for this gem are faceted and en cabochon.

Amethyst is a traditional gemstone with a very long history. It was highly valued in Mesopotamia, where it was used to make cylinder seals, and in Egypt, where it was displayed in jewelry.

Later, it would become a symbol of sobriety to the Greeks, who carved wine goblets from it to prevent drunkenness, and a symbol of purity and ecclesiastical dignity to the Christian Church.

In medieval Europe, soldiers wore it for protection in battle. This regal violet gem can be found in the ornaments of princes and clergy.

Its high spiritual symbolism led to the inclusion of an amethyst ring as part of a bishop’s regalia – hence the name “Bishop’s Grade,” given to the highest grade of amethyst.

It was also one of the ornamental stones of the breastplate of Aaron, priest of the Hebrews.

The use of amethyst, however, goes beyond ornamenting or carving.

The birthstone of February is considered to have multiple healing and balancing properties and is also used in meditation to calm the mind.